A native of Korea,  cellist Daeil Yang received his Bachelor of Music and Masters of Music at Aaron Copland School of Music at City University of New York, where he studied with Alexander Kouguell, Vagram Saradjian and Marcy Rosen.  He has acquired his Doctorate in cello performance at the University of Rutgers in New Jersey under numerous scholarships.

Dr. Yang continues to give recitals and chamber music performances throughout the United States, and is an active cellist, teacher and clinician.

Aside from coaching his students on weekly basis, he has a few chamber groups that he performs with regularly (COAX ensemble, Trio Da Camera, Newklang Ensemble and NJ Chamber Ensemble). He is a founder and the director of New York Orchestal Society group, and N.Y.O.S. summer festival.

With his growing desire for “amelioration of tone,” Bella Rosin company was founded by Dr. Yang in 2016, which is now being used by key members of New York Philharmonic, Chicago Symphony, Metropolitan Opera, Philadelphia Orchestra and Broadway musicians. 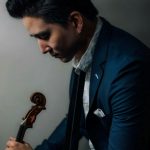